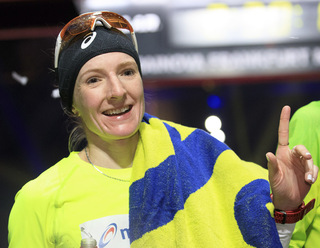 Katharina Steinruck will run in the Mainova Frankfurt Marathon on 27 October for the third year in succession.

For the 29-year-old her marathon comeback after an operation on her heel is the chance to qualify for the Tokyo Olympics in 2020. The qualifying time is 2:29:30.

The organisers of the Frankfurt Marathon expect up to 14,000 runners to take part in the race, and places are still available.

Katharina Steinruck – still better known to many under her maiden name Katharina Heinig – is the first prominent female runner to be signed up for this year’s Mainova Frankfurt Marathon. “We are very pleased that Katharina has decided to run in the Mainova Frankfurt Marathon again and we will offer her the best possible conditions to run an Olympic qualifying time,” says race director Jo Schindler.

“I am happy that we can present a top German runner who is also a local champion. Many Frankfurt citizens will identify with her, as she lives and works here in the city,” he adds.

“It is always something special to be able to run the marathon in your home town,” says Katharina Steinruck, who belongs to the police sports team of the state of Hessen. “I have lived in Frankfurt for 15 years and of course I have many friends and colleagues here who will come to cheer me on. I am already looking forward to the awesome atmosphere.”

In the previous two years Katharina Steinruck made a strong showing and achieved time of slightly under 2:30. In 2017 she unexpectedly became German women’s champion in 2:29:29 and came eighth. Despite a short training time after starting the Euro championship in August, in 2018 she reached the finish line in the Frankfurt Festhalle in 2:29:55.

After an operation on her heel last November Steinruck returned to running to win the 7.9km city run in Aschaffenburg in May. Looking forward she is now preparing for the race in her home town on 27 October. Currently she is training in the pre-Alpine Allgäu region of Bavaria.