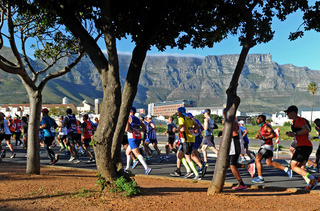 The Sanlam Cape Town Marathon is appealing for charities to get involved in this year’s springtime event. Its Run4Change programme aims to make an impact in key areas including climate action, affordable and clean energy, health and wellbeing, as well as peace.

The Marathon has built up a network of over 50 charities that use the event to leverage change in their respective communities. Two of these are Township Farmers, which creates small-scale organic farming in previously disadvantaged communities, and Greenpop, which plants indigenous trees, gardens and forest gardens, and runs development workshops and environmental festivals. Township Farmers is raising funds to plant 2019 trees in Khayelitsha schools and surrounding neighbourhoods, while Greenpop offers free entrance to the 10km Peace Run/Walk if runners are able to raise 840 ZAR (54 EUR), the cost of seven trees.

Aiming to increase last year’s 2.5M ZAR raised for charity to 3M ZAR, race ambassador and Olympian Elana Van Zyl Meyer is calling on a greater number of charities to seriously consider the benefits and enormous potential the marathon can offer as a platform to yield moral and financial support for the issues they are tackling.

Sanlam’s Head of Brand, Mariska Oosthuizen says “Our sponsorship of the Marathon is very much aligned with our vision of making a positive difference in people’s lives. We deal on a daily basis with one out of four people impacted by cancer, so we try to join hands with people and decrease the incidence of this dreaded disease. This year we’ve extend our partnership with the Cancer Association of South Africa (CANSA), asking runners and supporters to raise funds to help beat cancer.”

Race director for the marathon, Janet Welham says “Our goal has always been twofold: to give marathoners a truly world-class city marathon sporting experience, and to create meaningful change in the areas of the environment, society and the economy.” Welham has been appointed by the Association of International Marathons and Distance Races (AIMS) as a founding member of its sustainability commission, which works with marathons around the world to create a greater degree of environmental sustainability in their events.

The Marathon has had an equally positive effect in the areas of health and wellness, with no fewer than 16 health-focused charities using it to generate funds. Alongside this are the Western Cape government’s healthy-lifestyles initiative, a women’s gathering that focuses on issues, trends and solutions related to women’s health in relation to sport, and the Say No to Doping programmes run by UNESCO and Drug Free Sport. The Marathon will this year be hosting the Sri Chinmoy Oneness-Home Peace Run, a global relay seeking to inspire the creation of a more peaceful world. And it will again support as two of its official sports-development charities Endurocad, an academy for the development of high-performance endurance athletes chosen primarily from disadvantaged backgrounds, and the Western Province Kids Athletics Development Programme.

The Marathon, which attracted in excess of 23 000 athletes from over 82 countries last year, has won an array of social and environmental awards. In 2017 it was one of the first marathons in the world to win the coveted AIMS Green Award; and in 2018 it won a bronze award at the South African Eco-Logic Awards and was voted as the 2018 Event of the Year by Runners World (RSA).