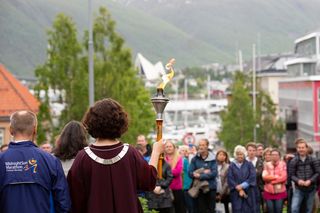 Race organisers at the Midnight Sun Marathon (NOR) were delighted to receive a visit from the Marathon Flame at their 30th anniversary race.

The anniversary was honored by the visit of the Marathon Flame from Athens and the city of Marathon. The delegation from Greece represented by Vice President of SEGAS Mr. Ioannis Lioumpas, Board Member SEGAS, Mrs Paraskevi Pachatouridou and Member of Athens Marathon O.C, Representative of Marathon Mr. Spyros Zagaris. Spyros is a former mayor of the city of Marathon.

The Marathon Flame was for the first time transferred electronically from Athens to Tromsø in Norway. It was the first time the Flame had been to the Arctic and in Scandinavia.

The flame was lit by electronic signal sent from Athens on Friday 21nd June, the day before the marathon. The signal lit a fuse in Tromsø which transferred the flame to the fire. Mr. Spyros then caught the flame from the fire with the Marathon Flame Torch. The torch was solemnly handed over to the mayor of the Arctic city of Tromsø. The mayor thanked the flame and handed it to the race Derecor Nils I. Haetta. Haetta then started the MF relay, which had 20 stages.

The torch was ran by sports youth and former athletes, including Håvard Klemetsen who has two Olympic Golds combined. In total, the distance that the torch relay was over 8km. Nice view around the famous Arctic Cathedral with the majestic snow covered Tromsdalstinden in background. The torch was followed by over 50 different national flags representing the fifty nations with the most participants in the Midnight Sun Marathon.

There was no midnight sun that lit up for all the participants as the weather was wet and rain, but there was no obstacle to creating a party for many hours on Saturday afternoon, evening and night.
The times achieved show that there were still nice running conditions even though the rain was pouring down through much of the race. In spite of the bad weather there were crowds who cheered the runners through the course.