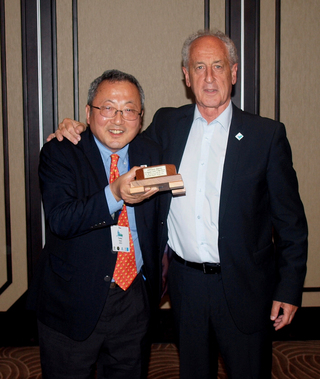 Yutaka Sasai, longtime servant to distance running in Japan and throughout the world, passed away on 31 March 2020. He was undergoing hospital treatment for cancer of the liver but during surgery a strong lung cancer was found. The additional surgery proved to be too much.

Sasai acted as interpreter to Hiroaki Chosa from the founding Congress of AIMS held in London in 1982 and at the preparatory meetings held before in New York and Honolulu. He fulfilled the role of ‘interpreter’ in the broadest possible sense and with Mr Chosa’s succession to the AIMS Presidency in 1990 he became a valued confidant.

Now President Emeritus of AIMS Mr Chosa said: “Yutaka acted as my personal secretary for 40 years. His always cheerful demeanour was matched by serious, honest dedication and an unwillingness to criticise anyone. He was a real gentleman, self-taught in English and with an easy manner. His AIMS reports were always accurate and quick and guided my decisions. Right now I’m feeling like I’ve lost an arm. Yutaka will be talked about forever.”

Yutaka Sasai attended Rikkyo University in Tokyo, a leading institution in the field of sports, internationally orientated and involved in many overseas projects. After graduation in 1973. He joined the sports shoe manufacturing company Onitsuka Tiger. Onitsuka had provided the shoes in which Derek Clayton smashed the Marathon word record in 1967 by running the first ever sub-2:10 time. In 1977 the company merged with two other sports clothing and equipment manufacturers to form Asics.

In 1984, as the marathon boom took off in Europe, Sasai began to work at Asics’ European headquarters in Dusseldorf. Race director of the Budapest Marathon and AIMS Board member Arpad Kocsis said: “l first met him in Budapest in 1991. He always smiled. He always had some kind words. I am sure there was no man or woman who didn’t like him. He was a very conscientious person, working a lot and working hard.”

He moved back to Japan to become public relations manager of Asics in 1992. Mr Chosa had become President of AIMS in 1990 and Sasai continued to work closely with him. He changed jobs at Asics to become promotions manager in 1996 and marketing department manager in 2009. Throughout this time he was deeply involved with AIMS as membership grew from 70 to over 300 under Mr Chosa’s tenure of the Presidency.

He retired from Asics in July 2014 and became an advisor to R-bies, Japan’s largest running company with interests in publishing, race organisation and providing support services. He was instrumental in R-bies becoming AIMS’ registration partner. Right up until he went in for surgery he continued to work through R-bies on the promotion of Japanese races to overseas runners and holding the 24th World Congress of AIMS in Osaka, Japan.